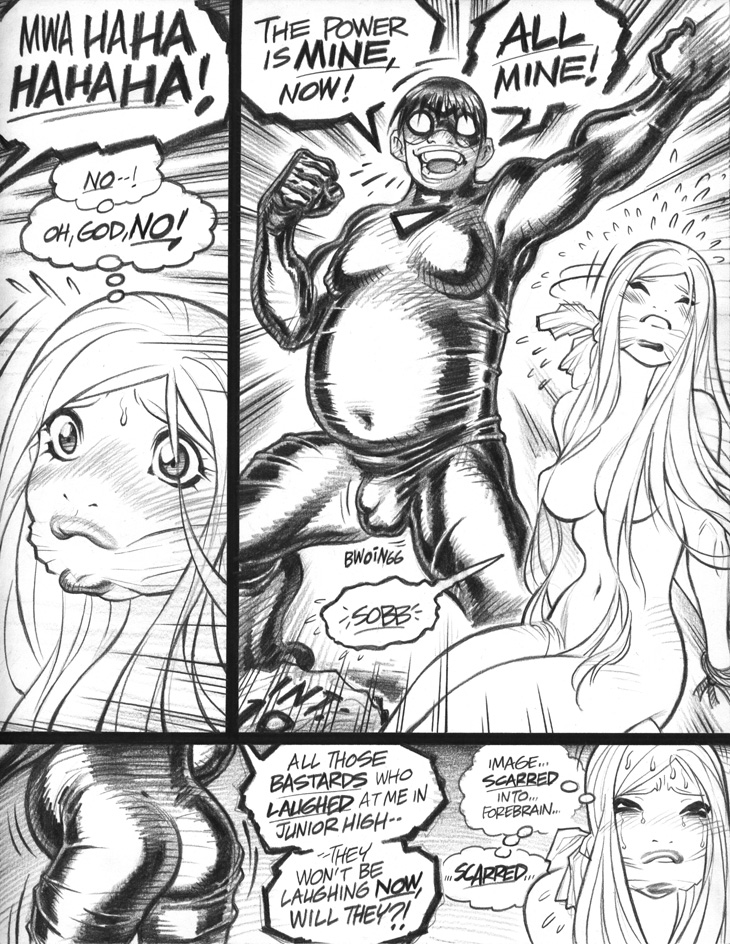 As panel 2’s “BWOINGG”-tastic image clearly displays, who says I don’t deliver equal-opportunity hawtness in my artwork? (In fairness, matters do improve a wee bit in that department once Emp’s strapping boyfriend Thugboy eventually makes an appearance in the series.) In contrast with the striking image of Chubby Guy’s supersuit-wrapped junk, note the flowing strands of naked Emp’s hair, conveniently covering up her Naughty Bits; this will become a recurring riff throughout the series, as it amuses me to no end to never quite depict full-on nudity in Empowered, despite some highly suggestive scenes soon to appear. (Some readers, it should be said, are rather less appreciative of this “never-nude” approach. Sorry, guys.)

Panel 3’s dialogue is, I swear, a direct quote from an overenthusiastic comics artist I knew back in the 90s, who let fly with these very words upon the release of his first published work. Surely, this optimistic fellow exulted, his old high-school tormentors would now sing a wholly different tune once they took a gander at his pencils for a fill-in issue of some godawful, hyper-obscure title (from a long-defunct company, I should clarify). I strongly suspect that this little scenario did not, in fact, come to pass; however, his rather deluded declaration did provide me with some useful scraps of dialogue for a similarly optimistic bad guy. Thanks, dude!