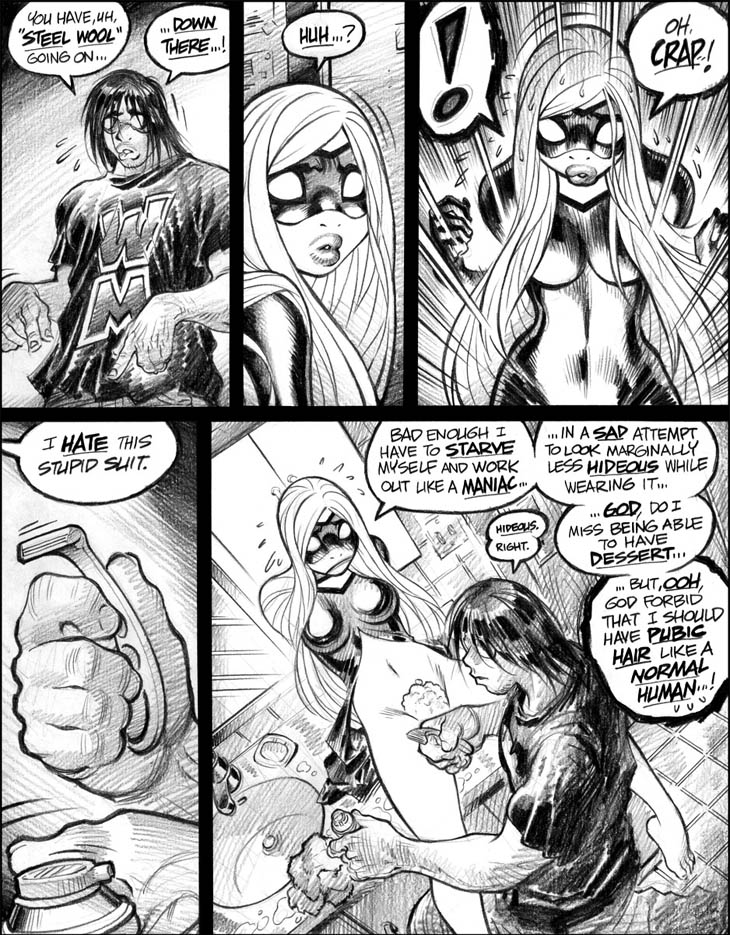 Panel 1: Yeahp, Thugboy’s somewhat crappy-looking “WM” T-shirt is a reference to his old days as a “Witless Minion” victimizing unsuspecting supervillains. Perhaps one could consider the T-shirt to be appropriately lame, given that Thugboy and crew would’ve had to get the shirts printed up themselves. If so, the Witless Minions’ skill sets clearly didn’t include a talent for merchandise design.

Panel 3: Note that I never quite show what the interaction of Emp’s pubic hair and her mercurial supersuit actually looks like. Readers with good memories, however, will recall that Thugboy described the results as resembling “latex-covered steel wool” in an earlier story.

This may verge on Too Much Information for most if not all readers, but the pube-shaving scene kicked off by panels 4 and 5 is, in fact, based on a real-life incident. No, really! For good or ill, though, it's based on a real-life incident that did not directly involve me, as my life is rarely quite so interesting. Note, by the way, that this rather embarrassing sequence from the book is what first sprang to my mind when, 7 or 8 years ago, I made the mortifying discovery that one of my younger kinfolk had actually bought and read Empowered vol. 1. Just what I needed, to absolutely cement my rep as The Creepy Uncle! "Sigh," as Emp is wont to say.