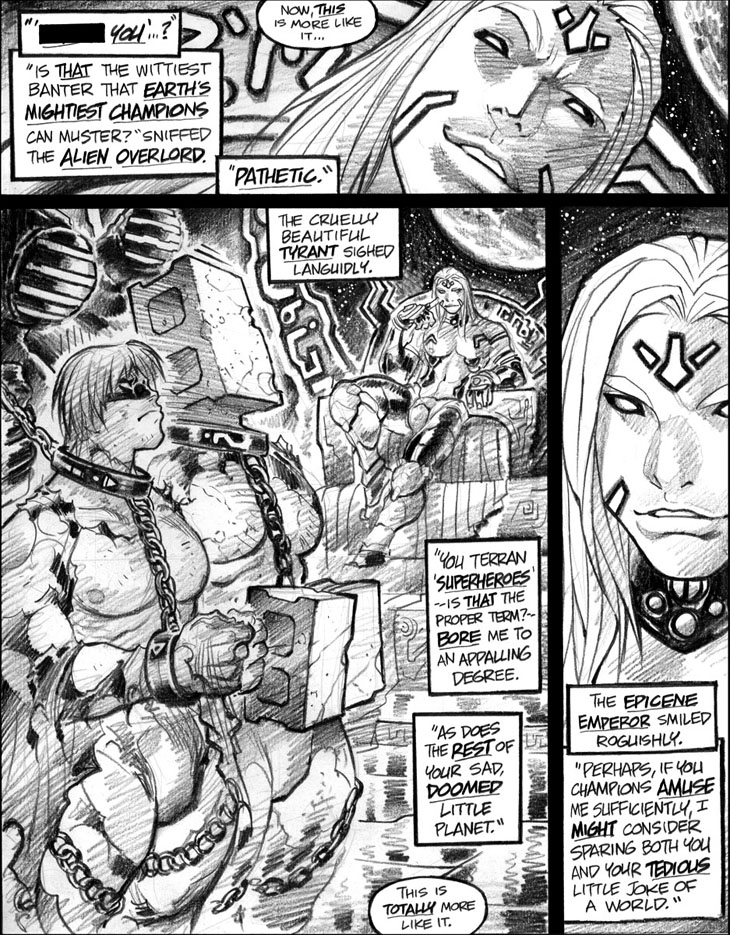 Sudden and jarringly abrupt scene change ahoy! What the devil is going on here?

Kinda like those alien goons in the background of panel 2, which remind me of the “Mindless Ones” from Marvel’s Doctor Strange a little bit. This may, in fact, constitute the lone Steve Ditko reference in my entire body of work, come to think of it!

This page does bring up an interesting point: How common are strongly human-resembling alien being in the Empowered universe? So far we’ve seen the humanoid “Princess Arkashia” from the story “Love Changes Everything," but throughout the rest of the series, pretty much every other alien species we encounter appears distinctly, well, alien.

Belatedly occurred to me that, for a bit of a metatextual flourish, I could’ve made the interior of this alien spaceship resemble some of the design motifs from the old Atari arcade game Major Havoc, to which the superhero’s name already pays homage. Then again, such a concept would’ve posed quite the challenge for me to depict in black & white pencil, given that Major Havoc was an old-school videogame rendered with vector graphics: Such a visual homage might well have been a viable possibility in a full-color comic, of course. So, it’s probably just as well that I wasn’t tempted to invest much time in an effort to reference a videogame that only a handful of 80s-era arcadegoers would potentially be amused by. Then again, Empowered quite often features jokes and riffs that only one person—namely, me—would be likely to appreciate, so what would the difference really be?