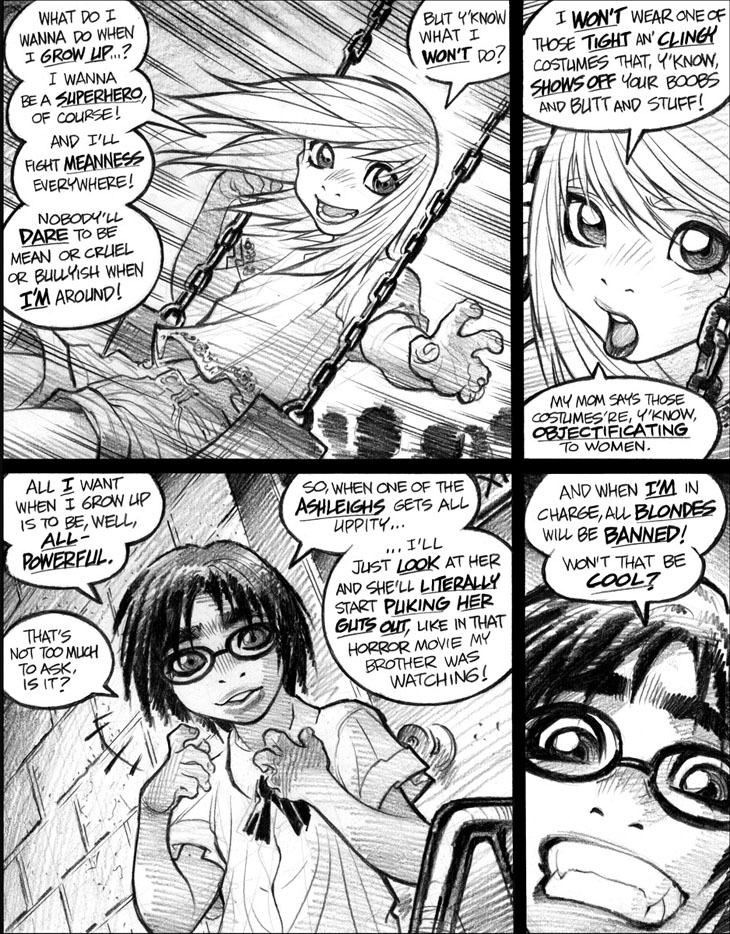 CRASSLY COMMERCIAL UPDATE, effective through 4/21/2016: In the interests of commercial floggery, I should hasten to mention that Comixology is holding a "Dark Horse Heroines Who Rule" sale on digital comics, including all volumes of Empowered. In case you'd like to jump ahead—waaaaaay ahead—of the vol.1 stories currently being serialized on this site, through 4/21 you can snag all 10 existing volumes of Empowered for the sale price of $5.99 each, as opposed to the normal price of $9.99. Here's a link to the sale (or you can just click the Comxology link in the upper right of this page).

As I’ve mentioned before, I’ve long considered doing an alternate-timeline spinoff in which Young Emp—as seen in panels 1 and 2—acquires her “supersuit” as a child at Peak Lifetime Confidence Level, rather than snagging it as a insecure, issues-intensive college graduate. (Er, SPOILER for the main Empowered timeline, I guess?) The enigmatic suit’s “hypermembrane” might well behave very differently indeed for a young, confident Emp, so this spinoff would boast a tone considerably at variance with that of the regular series. Alas, I’ve made no progress whatsoever in developing this side project—working title, Empowered Girl—but hope springs eternal, folks. Maybe someday…?

Serious horror aficionados will surely recognize that the Italian horror movie referenced by Spooky in panel 3 is Lucio Fulci’s 1980 film City of the Living Dead, released in the US under the title The Gates of Hell. The movie is fairly infamous for a horrific scene in which a hapless young woman literally pukes her guts out, a technically impressive gore flourish that grossed the hell outta High School Era Me when I saw the flick on video. Years later, I was repulsed yet anew to hear a few details of how the scene was filmed: Apparently, the poor actress really did have to stuff her mouth with sheep intestines(!) and then “vomit” them forth on cue. Yikes!

I’ve long intended to do something with the brother that Spooky mentions in this panel, but have never quite gotten around to doing so. Note that this is a common—if not interminably frequent—statement I’ve made in these commentaries, as I’m surprised yet anew at all the minor story elements I’ve either neglected or just plain forgotten as I look back over early Empowered. Then again, I already get enough crap in some circles for dangling long-term plot threads as is; if I followed up on all these marginal and picayune potential story tangents, surely the complainers would redouble their complaining. Okay, fine, that’s not really a serious concern for me; however, the restrictions of the series’ pagecount—and my own production limitations—really are a serious concern, as even Empowered’s open-ended format doesn’t allow me to explore all the narrative possibilities that I might like.