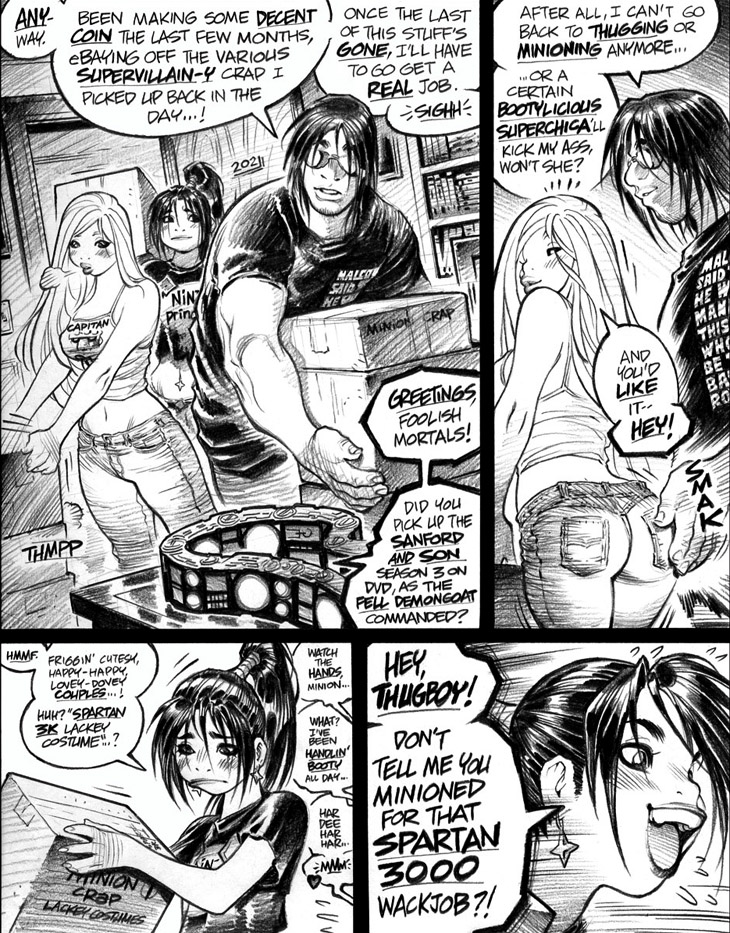 Thugboy’s dialogue in panels 1 and 2 looms large over an ongoing storyline I’m presently addressing as I produce pages for Empowered vol. 10. In a way, I’m glad that I never showed a specific conversation in which Emp forbade her boyfriend from going “back to thugging or minioning,” as this allows me a bit of flexibility in finessing the point. In fact, Thugboy is still eBaying stolen villainware as of the present day, months after this story took place, and never quite seems to have gotten “a real job,” either. Might this seem a tad suspicious? Might “something be up” in this department, as highly observant readers of the print series might have noticed? Hint: Yes!

Later developments fleshing out Thugboy’s troubled history will show that he was even more adept at the challenging task of messing with suprahumans than this story discussed—and, hence, arguably even less likely to have meekly knuckled under to Emp’s apparent insistence that he stop messing with suprahumans. (For long-term Empowered readers, I must admit didn’t create the important plot thread of the San Antonio disaster until midway through vol. 3—or so I think, as my recollection of early events grows hazier by the day.)

Tricky thing is, I occasionally depict Thugboy as a bit more of a so-called “beta male” than he should really be. I suspect that this is my own, well, inherent “beta-ness” creeping into a character that should arguably be portrayed in a bit more of an aggressive, hard-charging “alpha male” manner. Then again, throughout most of Empowered, we only rarely see Thugboy carrying out the work he was once so good at, a job at which he excels in genuinely “alpha”-worthy fashion. For the most part, we’re seeing the character in an almost “dormant” condition, adrift and rootless, unemployed and lacking much—or possibly any—motivation beyond his attachment to Emp. If he were again engaged in his chosen avocation, he might well come across as a very different person—much as his girlfriend will, come to think of it, as she gains confidence throughout the series.