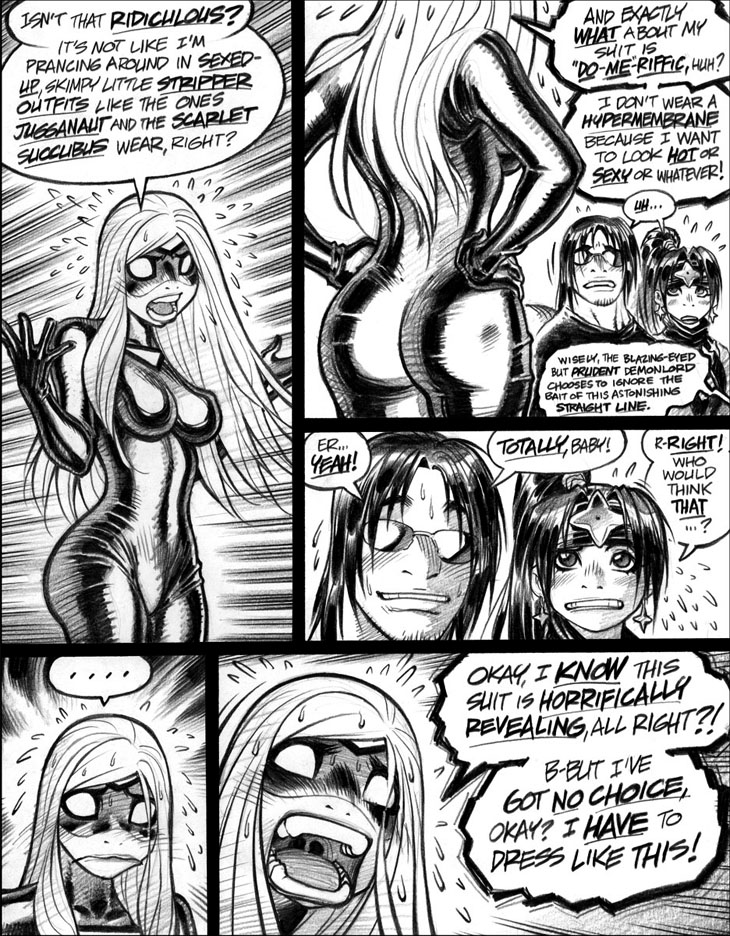 Panels 1 and 2 feature a touch of the oft-mentioned Mysteriously Intermittent Post-Millennial Torso Glitch that plagued my figure drawing during much of the last decade—but, alas, not quite enough of the Glitch to justify breaking you off my sprawling exegesis on the topic that lurks in my Draft Tweets folder. Sorry for the false alarm, commentary readers!

Note that Panel 1’s reference to the presumably skimpily attired Jugganaut pays off in a cameo appearance near the end of Empowered vol. 4—though, it should be said, what we can see of her outfit isn’t all that skimpy, as least as far as superheroine costumes go. In fact, rather than make you wait 600-odd pages, I’ll paste in the panel below. Enjoy? (Alas, vol. 4 is about where my tendencies towards "overdialoguing" began to afflict the series, as this panel might indicate.)

Still no sign of the Scarlet Succubus as of present-day Empowered, alas. (In theory, she might be one of the unnamed superchicas lurking in the background of assorted “superparty” crowd scenes from later volumes.)

I’m amused by panel 5’s close-up of Yelling, Upset Emp, with her uvula prominently visible at the back of her throat to help convey just how Yellingly Upset she happens to be. For the record, I believe that her exaggerated dentition, here, is an echo of the canine-intensive Yelling Mouths that 3X3 Eyes mangaka Yuzo Takada used to draw. I first cribbed his toothy maws for a panel in my second Dirty Pair miniseries, and have used variations on this riff off and on ever since. Ah, but of late I’ve been influenced by Yuji Iwahara (King of Thorn), a mangaka with an oddly opposite approach to Yelling Mouths: that is, he draws toothy maws that often lack any canines whatsoever—though I suspect he might have had to alter that tendency for the feline protagonists of his more recent manga Cat Paradise.

Side note from previous paragraph: Just wiki’d up Yuzo Takada to make sure I’d spelled his name correct, and discovered that he was once an assistant to Fujihiko Hosono, another mangaka whose work was a major influence on me. Small world, y’all! In fact, a future commentary will likely blither on at great length about Hosono’s romantic comedy(-ish) manga Mama, which I think I already mentioned in passing a week or two ago.