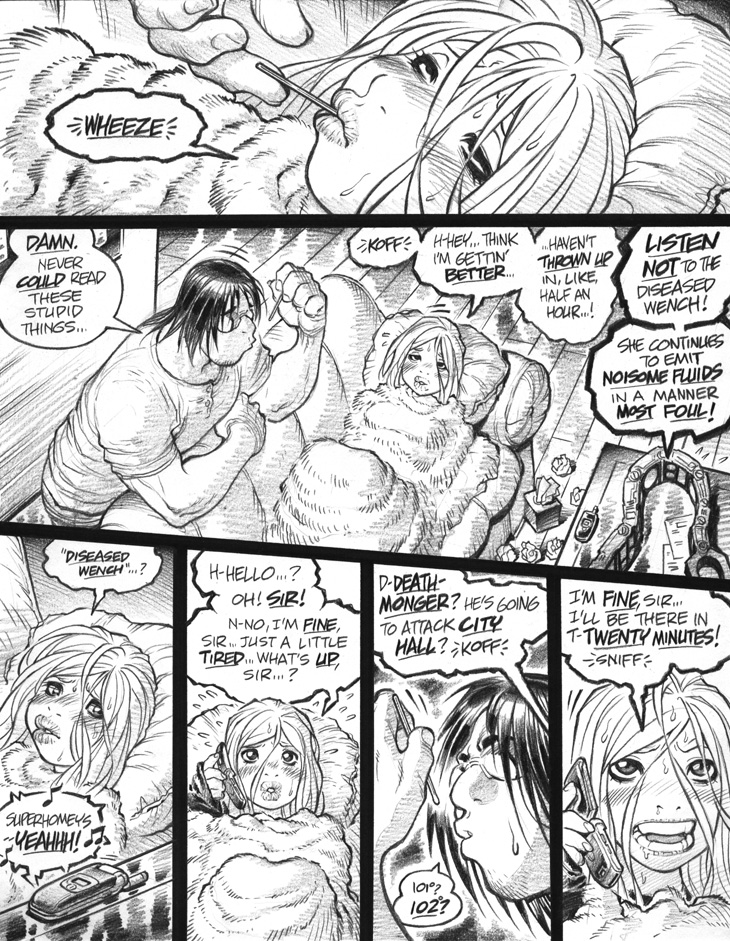 Throughout this story, behold the stringy, disheveled majesty of Emp’s “sick hair,” its disarrayed status meant to convey just how wracked by illness she happens to be. Between this flu-based hairstyle and her “Just Been F**ked” hair in the earlier story “J.B.F.”, I was definitely more adventurous with Emp’s coiffure in these early stories. Not really sure why I got out of this habit with subsequent volumes, but this is something I might try to revisit in the future.

In panel 3, note Emp’s use of a “flip-phone” cellular handset, a technological reference that was reasonably au courant when I drew this in 2005, but seems a tad less appropriate a decade later. In my meager defense, the smart phone wouldn’t really “become a thing” until the iPhone’s 2007 debut, so what else should I have done? God knows, depicting her with, say, a Motorola Razr wouldn’t have been much of an improvement; at least a few models of flip-phone still exist nowadays, which I suspect is more than you can say for Razr-patterned handsets. (A bigger issue, arguably, is the big ol’ cathode-ray-tube-based TV set that appears a few pages later, a tech reference which has really failed to age gracefully.)

I’ve occasionally considered taking a page from Hergé’s anachronism-effacing revisions of Tintin volumes by returning to these early stories and cleaning out their no-longer-appropriate references, technological or otherwise. Decided against that, however, as I would never dare to revisit old pages which I now view as “teeming flaw colonies,” to quote Dave Barry. If I ever started fixing the many, many errors I see in this decade-old material, I could easily send the rest of my career rewriting and redrawing the same g-d stories over and over again. Don’t look back, folks! (Says the guy currently writing commentaries on the aforementioned decade-old material. Sounder advice might be, “Well, avoid looking back, unless you absolutely have to.”)